Mo'chi looks tired in the inn.

Mo'chi looks tired in the inn.

Mo'chi enters the inn, grabbing an egg and absentmindedly taking off the shell. He's become something of a rarity in the inn and around Holdfast.

Besides praying at the Earth or Faerie circle, he's spent most of his time in bed. Now that he thinks about it, this egg is the first food he's had today.

And it's unappealing. Mo'chi sighs and gets ready to throw it away. 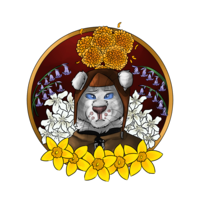 Professor Pendergast returns to the inn once more, for another cup of tea. He's spent the last little while in absolute seclusion, trying to attune to a tiara left behind by Verbena for the translocation ritual he has planned. He walks in and sits beside Mo'chi, letting out a rather sudden sneeze as he sniffles. It would seem he's caught a cold, caused by the fact of concentrating too much on the tiara and not enough on his own health.

He leans over toward Mo'chi and whispers in his ear quietly. "I promised myself I'd give her enough time to do what she needs to do... and now, I'm ready to do what I need to do," he says. "So what do you say we go get her back?"

Mo'chi throws the egg into the garbage when Penderghast comes in. He debates leaving when his friend enters- people, even people he trusts, are too much right now. Everything is.

But Pendergast sits next to him and there's now no escape. When Pendergast whispers, he stops trying to escape. With a quick look to make sure the inn is completely empty- it is, good.

He says in his quiet, raspy voice "What are we waiting for, then? Let's get her."

"Not right this second. We've some things to prepare. Come with me."

Quickly, he leads Mo'chi back to his and Keket's quarters, ushering him inside and quickly closing the door. He then proceeds to reach for his dark brown leather messenger's satchel, and takes out a sheet of parchment paper and begins scribing a letter.

"Suffice to say I am keeping information on this rather quiet, Mo'chi," he explains. "To use the colloquialism, I'm going 'off the reservation' on this one. Nobody is going to know, except for Robin... and of course, you. As far as I know, Robin is a more capable tracker than he was weeks ago. Do you think we should inform anyone else?"

Mo'chi follows his friend into his quarters, relieved that this conversation wasn't taking place in the Inn anymore. Anyone could walk in, if it was.

"We need someone who can fight, preferably more than one." He replies "Not anyone too close to Lady Val." If this whole thing was being kept quiet, anyone close to get would let the cat out of the bag.

This... wasn't a smart idea, he thought briefly. But they weren't going to get her back any other way.. "One of the..Knights? Guild?" Not Degren, though.

"Not on your life," he snaps immediately. "I'd rather feed myself to Marwhel with an apple in my mouth than ask that greedy bastard Degren Brightforge for any assistance in this matter. And the Guild is busy preparing for a war. I plan to ask Cosidious and Enyamia for assistance in this. They're expert hunters, and Enyamia's awareness is considerably higher. Robin will be coming as well, and he is a master tracker. Which reminds me, I need to track him down... excuse me a minute."

With that he pops off, closing the door behind him. Approximately ten or fifteen minutes passes from the time he leaves to the time he returns, looking mildly annoyed.

"Well, so much for that idea," he says as he starts packing up his ritual kit. "Val knows. So it looks like I'm not going to be slipping out of town under the cover of darkness to do the job myself. I've gotten the help of Cosidious and Enyamia, and she's insisted we take Krond, but I just spoke to him. From the looks of things, Godo has most of his attention, and he thinks we have a fairly well-rounded crew. Plus, his training sessions with Val have left him more fatigued. So it's just us five, by the looks."

"I wouldn't expect you to. I wouldn't want to travel with him." He nods when Penderghast mentions Enyamia and Cosidius. He liked those too.. at least, as much as he liked other Kaern.
He fiddles until Pendergast comes back, poking around the quarters a little bit. Seeing what's changed, fidgeting.

He gives his frustrated-looking friend a look when he enters again. Krond thought they had a good crew? Alright.

"This is a very, very bad decision but it's one I'm making. If Krond thinks we have a good team, I trust him. I'll take a couple poultice and bandages."