Winnie spends the morning collecting wood and fashioning it into small planks at the request of Father Francis. There’s a lot on her mind and she hoped that the work of making boxes for him would help her focus on what she needs to do and how to accomplish it.

Placing the edges of two pieces of wood against one another at a right angle, she marks how deep the pieces will nest into each other by making a line across the wood and brings the line around the sides and back of the wood.

Carefully, she measures out where the bevel cuts will go and marks them down to the line she made when measuring the nesting depth, making sure to keep the lines parallel to each other, then, marking more lines that are mirrored to the first set. After making all of her markings, each end of half the pieces of wood have drawings resembling up-side down triangles.

With a small saw she cuts down along the lines, and then spends a good amount of time chiseling at the middle pieces to create the hollows for the pin pieces to fit through. When she finishes, the end of the piece of wood resembles three fanned out bird tails.

Then, she begins work on the adjoining piece. She traces a scored outline of the tails she just carved onto the edge of the other piece using a sharp knife. After marking which pieces she has to cut out and making sure the angles of the bevels match the tail piece, she again saws down the lines carefully until she reaches the line that she measured out at the beginning. Slowly, and carefully she chisels out the inside bits to create the pins that will lock together with the tails for when she smacks it into place to create a box corner.

Winnie continues her process for a better part of the day, eventually managing to get a couple small boxes completed. She would have to get to the other ones tomorrow. Father Francis requested four to hold ashes but she had decided to make five instead. The fifth wouldn’t hold ashes because there weren’t any. The fifth would be a small gesture of thanks to a certain ghost who came to help in their time of need. 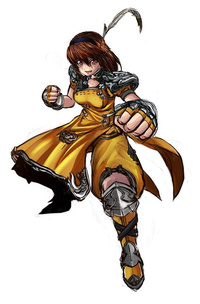 (For "some reason", there's always a glass of light lemonade nearby that keeps disappearing and refilling itself while Winnie is focussed on her work)