Gurok storms into the Inn, yelling "WHERE THE FUCK IS TORVALIS!!" 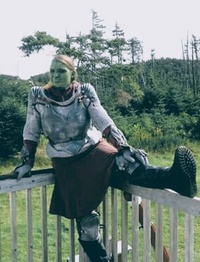 A shout can be heard from the basement:

*Gurok runs down into the basement, nearly falling down the stairs.* "WHAT THE FUCK ARE YOU DONG WITH MY BODY YOU DEPRAVED BASTARD!!?? I NEVER AUTHORIZED YOU TO DO ANYTHING TO IT!!"

Torvallis! stops what they're doing, confused.

" . . . is this not what we talked about? Special preparation before Cremation?", handing over a bottle.

" . . . yeah, we did. You brought it up while the merchant was in the inn. That's why I knew to keep this for you,", Torvallis! tries to hand the bottle of blood over to Gurok again.

"So as you can see, your body has been minimally touched: I've been using these syringes from my medic's kit to drain different fluids from the body, mostly the waste. This will help to make the cremation less awkward: no cooking meat smells, and no bursting organs or skin. The body still looks exactly as it did before, as no one wants to confront the reality of death when at someone's funeral/cremation. And I wasn't about to consider the use of any sort embalming fluids or techniques on an elf . . . I have no idea what Faerie thinks of all that and was given no instructions to use such, as well as preparing for a cremation and not for an open casket funeral.

That said, you seem to have forgotten an . . . important . . . conversation, so I'll be stepping away from the body now and leaving you to it."

OOG: I tried to do that myself during the event- Sharon said it wouldn't work. Do you have Life Skill mortician?

OOG: I tried to do that myself during the event- Sharon said it wouldn't work. Do you have Life Skill mortician?

(OOG: Ah, now that's a question. I have medic 3. If I need lifeskill mortician, I guess I did nothing to your body)

(OOG: I'd say that was enough if I hadn't tried it with medic 4, sorry!)
IG: *Gurok snatches the empty vial from you.* "No Touchie. Mine. Fuggof."
"- Also did this have anything to do with the explosion?"

(OOG: So I guess we're saying that you interrupted me before I managed to do anything at all?)

"Disaster follows in your wake Torvalis!. I've been here long enough to know that."
(OOG: did father Francis tell you that my body's head is bald?)