Degren trudged through the hard snow, his pack weighed him down and made each step a struggle. He was tired, cold, and hungry; the journey had been rough, and had nearly taken his life on several occasions. Now, though, he saw familiarity at last. He's seen great beauty in his travels. The crags of the Mountains has spoken to his spirit, the rushing rivers of the Wilds had touched his very soul; but, it had all been alien to him. Even the great halls of Gernfast, his ancestral home, had made him feel like a stranger in a new land. The path he now stood on, though, felt right. The trees, even covered in heavy snow, welcomed him and eased the weight of the road ahead. His gear, packed tight in his pack, seemed to lighten and he pushed forward, finally turning the final bend. A small camp, hidden amidst tall pine trees, stood before him. Smoke rose from a small forge that warmed his heart more than the heat from it ever could. With a few labored steps, he dropped his pack, letting it clatter loudly into the snow, and fell infront of the flames, holding his hands to it for warmth. At last, he thought, I'm home.

Auron, preparing for what he suspects will be yet another day of training and watching over the town defenses, hears a loud thud come from outside of his tent. 'Nobody visits the camp at this hour.' he thinks to himself. He grabs his sword, and exits the tent, ready for a fight.

However, his suspicion is immediately quelled when he sees who stands before him. "Degren?" he asks, unsure if he entirely believes what he is seeing. He does a quick visual scan of the area, and sees the dropped pack - and the idea of any other burly man quivering in front of the forge in this manner seems unlikely, so he decided to believe what he was seeing. "Degren!" he exclaims as he puts down his sword. "I was unsure I'd ever see you again!"

His thoughts remind him of why it was that Degren had been gone for so long, and his expression becomes slightly worried. "My brother... can you speak?"

Degren's heart warms at the sight of Auren, but cools quickly with his question. Silently, his head shakes, the look of disappointment thick upon his brow. Stepping closer, he slaps his large hand over the blued plates of his friends shoulder and offers a reassuring grin.  After a moment, his eyes brighten and he rushes back to his pack, and begins rummaging excitedly. Before long he's pulled a mass of scrolls, books, and small baubles from the bag. He spends the time to show Auron each and every piece of ancient lore that he brought back, saving the final piece for last. After the pages are stowed away safely, he pulls a small, metal hammer, tied with a thong of leather, from his pocket. Happily, he boasts the holy symbol of Torag to his friend, proud to have found such a rare thing.

Auron smiles. "I'm happy that your adventure proved fruitful, my friend." His smile slowly fades and his expression becomes more serious. "Though I'm sad that you still can't speak, I'm sure we'll find a way to get your voice back somehow. There has to be some way..."

Realizing that Degren might be interested to know how thing have been going, Auron decides to give him a briefing. "Since you left, not a lot has happened. Pierre and the others are still gone, I don't have any idea where they are now. Allura also left on personal business, and it's unknown if she will return. Datura, Krond, Asher and I have been keeping an eye on things here, but the winter has been very quiet thus far. We haven't had much to worry about." The tone of his voice suggests that Auron is simultaneously grateful for the quiet, while also desperately hoping for some action.

Deciding to try to keep things postive, he says "With you back though, maybe we can start having some more merry nights by the fire! The absence of your cooking has left a hole in my heart. And my stomach. Did you bring back any special treats from the Empire?"

Degren smiles, pulling a pouch of spices from the bag and excitedly shows them to Auren. A dark red granular spice labeled "chili, powdered" seems to be the most interesting. Then, after putting the spices away, pulls up his shirt to reveal a long, mostly healed wound in his lower abdomin. On a piece of scrap, he writes, " dodged the imperial on the way out. Got caught on the way back in. Their version of a "special treat". He laughs heartily at his own joke,and hands over the note.

Almost as an afternote , Degren scrawls another hasty note, " and don't worry about Pierre. I'm certain he got out of the mists fine. He had plans to go home before getting back here, so I'm sure he's piss loaded drunk right thus minute off that swill he calls wine. You have no reason to fear for him. Now. Help me prepare some food, I'm starving!"

Datura strolls in at a brisk pace; a subtle grin plastered on his face. Approaching his comrades with a large, ominously bloody sack slung over his shoulder, he reaches out his one free hand to Degren for the Knight's signature handshake.
"It seems you've returned Brother, and still intact at that. I'm sure Auron's given you the lowdown on what's been happening around here in your absence."
Datura tosses the blood-soaked sack to the ground next to him. As it lands, its contents partially escape, revealing the head and antlers of a slaughtered deer.
"I don't suppose I need to ask you prepare this thing? I think I speak for everyone here when I say we've missed your touch of hearth and homeliness around here." 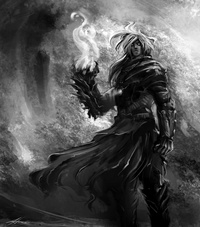 Degren grasped his friends forearm in a powerful grip, grinning wildly to see his comrade. Inquisitively, he looks in the blood soaked sack, revealing a mound of blood and fur. Whatever creature it was It was now unrecognizable , and looked as though it had been butchered by a massive blade.He Looked at Datura with a sideways Glance,  and motioned towards the bloody mess, what was this thing?

"Well if Degren doesn't mind, bloody meat is on the table tonight." Datura declares as he leans his sword against a nearby tree and makes for his favourite tree stump. Shedding his heavy armour, he plops onto the stump and lets out a sigh of relief.
"I wonder, is it safe to assume that you're here to stay? Or do you have more expeditions planned in the near future, Degren?" asks Datura, whilst pouring a flagon of ale. Noticing the frothing bubbles pouring over the side, he attempts to inhale as much of the beverage as he can, giving him a frothy moustache. He wipes his face with his free arm and continues to down the ale.

Degren upends the wet crimson contents of the bag onto the table, picking away bits of fur and shards of bone before turning to write a note. He hands it to Auron, knowing Datura hasn't yet mastered the art of letters.

I'm  not going anywhere. I've had my fill of travel for the next while. I searched for a person to remove my curse, but had trouble finding anyone with sufficient to power to do so. Those that had the power refused out of fear. I have begun To believe that it isn't a matter of just removing it, but of removing the person who cursed me. I believe that's my best bet for salvation. I know it was the empire that did it, so maybe next I'll travel to confederate lands-- surely they don't fear anything the empire can do to them. But that is for another time. For now, let's cook this up, and get so blindly drunk that we're all too fucked to talk, cursed or not.