Marcus stares deeply into the page, eyes gleaming with contemplation as he leans closer and closer.One hand coming up to stroke his chin as he gathers every ounce of his concentration and brain power to piece together the complex hieroglyphics before him. The air becoming deadly quiet as he raises his eyes to meat Hugo's. Pausing again and raising his hand from his chin to point towards him. as he pieces together the final final full meaning to this one sentence. pointing at Hugo

"yes, least i think so you could be talking about ducks for all i know" 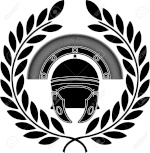 Degren pours another drink for anyone who's glass was empty, "I'm looking fer good fighters, so I'm asking around for people's skill sets to put together proper squads for formations. So, what's your schtik, lad?"

"i grue up hearing and studying the story's from every military hero to ever set foot in the capital, joined and trained with the greatest fighting force the world has ever know, survived the destruction of me regiment and killed every-man responsible for said destruction in a blood fueled rage, dedicated the majority of me young life to waging gorilla warfare against one of the greatest threats the empire has ever faced,last two years i'v captained the local militia growing it from barely a tent to edging up on a proper contubernium"

The door swings open and slams closed a tall dwarf stand at the other end of the inn with a keg on his left shoulder and a crate with several bottles of mead on the other. He kicks the snows off his boots and throws his gear down on the counter. He looks rummages around for a bit and finds a knife grabs a knife and uses it pin a note to the wall. He taps the keg, takes his ornate tankard off his belt and pours a pint of dwarven stout into it. as he takes his first sip the weary tired look melts from his face. He sits at a table across from Degren. "I need te talk te ye lad, but first there is some bad news for everyone."

"Borin! My favourite forge dwarf, who keeps the forge hot and ready in the cold cold winter!

. . what's the bad news? Has potato day been moved up for some reason?"

"Ay, the crop failed because o' old man Tim's injuries we dont have enough potatoes, i ordered some from the Thunder mountains but they won't be here til next year."

Degren snaps awake, having dozed off after finishing a few more shots of the strong liquor, "Not the potatoes!" He grumbles, wiping drool from the corner of his mouth. "What'd ya need,Borin? 'Ere, have a taste of something a wee bit stronger" he pours a tall shot and sloppily slides it down the table towards Borin.

Borin takes the shot and shrugs. "Its alright I guess, I could show ye a thing'r two 'bout brewin' sometime. But what I actually wanted te talk te ye about somethin' thats better discussed in private."

"Aye. Never got into brewing ' me self. I got this behind the counter" he drinks one final hot before standing up, "alirghty then. Let's speak outside, I'm yearning for a for draw on the ol' pipe anyway"

Borin finishes his drink and stands up. "I need to grab a few things, I'll meet ye by the forge when yer ready." He grabs his still wet cloak from a hook by the door and leaves.

(OOG: send me a PM when you get to the forge)

Degren stumbles back into the tavern about an hour later, and kicks his feet at the door to knock most of the snow away. He sits himself across from Marcus and pours two more shots from the bottle he left behind and slides one to Markus. "I have a plan, lad. We've a militia, yes, but we're brutes in battle. We lose any and all semblance of order when the swords start swingin'. Don't get me wrong, lad, I enjoy a bit o' the ol' rough housing, but what happened that night with that bongo-totin' freak could have gone better with a bit of order." he pours another shot and continues, " Here's me plan. We take all our fighters, those that'll join us, and we give them a bit of basic training. Maybe teach a few of the others how to swing a blade. Then, after they've got basic stances and a few techniques under their belt, we split em' into squads. Each squad with a captain that takes orders from a commander, but that're able to lead their men when the commanders away. With two or three squads, we could control the battlefield with sound tactics. I'm thinking two groups up front with a larger third group in behind, made up of our long ranged warriors and a few o' those quick fella's we've got, like Hugo, fer example. These quick ones will be in charge of picking off stragglers who try to out flank us, as well as dragging the wounded away. Whaddya think, eh?"

Marcus takes back his drink

"i see what your saying, we defiantly need some better organization within the militia. i mean our fighters are solid but a lot of them arnt used to fighting in rank and file. we teach them how to work off one another strengths and how it all blends together in the big picture. i also think we need to work on our threat response skill. it took us way to long to get organized for our quarreler with the necro-dancer. if we had some men on patrol ore at various look out points around then inn we could have greater warning of incoming threats "

Nodding, Degren says, " Aye. Who do you think we can convince to join our little crusade? We've got to emphasize response times as well as group fighting. These people need to learn to fight as a single unit, which means they need to get to know one another like family. Maybe splitting them into squads and then have them squads spar, giving us a fair view of who belongs where and which squad needs work."

marcus looks puzzled for a second

"you keep useing this word...SQuwADs? SqUAds ? is that some dwarf slang? it dosen't sound right"

he takes another drink

"i'v gathered that its a smaller groupe of fighters but how many exactly ? 3 ? 12? squeven? see in the empire we had tents right."

"right so a tent is about the average number of men you could comfortably fit in a standard issue tent.so around 5-8 and that was as small a unit as the empire made short of calling you out as one guy"

"A squad is just any unit of people organized for tactics"

"Although it's associated with a tent of men in the empire, that's mainly because that's the normal size. For special operations they have smaller units for specialized tasks. Like flag men sometimes have comm-squads for longterm battlegrounds, because they need special group tactics evolved on that battlefield. They can have individual squads of only 3 or 4, usually operating much closer to the general than the usual squad. So we would have squads of 3 or 4 . . . under General Valiant, in my preference"

" . . . I was in the military band for a short while after conscription. We had a tent of 5. The drummer, the flutist, the bagpipes . . .ist?, the opera singer, and the war-poet. Ah yes, they called us The Rejects. Crassius had painted it on his drum"

"Aye, he's got the right idea. Afraid i don't know no general Valiant though. Who be he?"

marcus nearly chokes on his drink

"torvallis! you never said you were in the band ?"

"do you remember your band number? i was the 36th pipe and drum under generals geta's 22ed expeditionary legion"

"I believe our band number was 'X', and we were under the reservist's reserve militia's reserve. Our duties were mainly administrative and logistical in concern, and the reason for our unit's creation seemed to be mostly 'Well, we conscripted these useless shitters, now what?'"

" aye. I've nothing but respect fer the good lady valiant  . But I've heard she's of a ruthless sort, especially fer us non-elf types. A single general may not be the right path, either way , but a commander who follows the will of a high council. My choice fer commander would be ol' Markus here. He's one o' the best commanders I know, having had a few training sessions under him, already... But I've also seen his fanatical belief in the empire cloud his senses. Nearly killed yerself on that potion, ye daft dodger!, " He takes another drink from his flask, laying it on the table for anyone else who wants it," Of course, we could ferget the idea of a commander altogether an' just keep to captains of each squad, er-- tent. That way we keep a group to make decisions. Either way, this all depends on who we can get to join us, and do drills and the like. Hells, Maybe you can put together another band squad?!"

marcus refills his glass and takes another swig

"Torvalis! never belittle your service friend. from the lowly'est conscript to the proudest legonairy we all have a part to play in the emperors service"

he then turns to degren

"your offer flatters me Degren, i'm sure once the snow falls and the fields can once more be drilled we will have some better luck organizing the tents and captains and such."

"although if i were to take up as commander i may have to revise my dress a tad. make my self easier to pick out in the confusion of battle. perhaps i could get young horns to fallow behind me with a battle standard"

Degren snorts a laugh, "Now wouldnt that be a sight to see?" he drinks again, " you'd have to put blinders on the young lad, he can't stand the sight of death! Imagine him on a battlefield!" Degren considers for a moment, "Great medic though, with a heart of gold to boot. Lad went to hell and back to help us... As far as battle standards, couldn't you just tie a flag to that there boulder-stick O' yers?"

Marcus starches his chin for a moment then shakes his head

"I think Horns should be the leader of our medics squad. Which would be composed of able medics & body-carriers"