A rush at the Air Circle

A rush at the Air Circle

The air around the air circle starts to stir, the breeze picking up. The breeze changes from light to heavy. From a heavy breeze to a full wind. From a full wind to a gale. An invisible battle is happening at the circle. Involving who, no one knows. Sides, impossible to determine. The gale is almost causing a tornado around the circle. Clashing is happening within the winds. Rising, threatening to destroy the surrounding structures. Trees miraculously remaining standing as they creak, groan and threaten to crack and uproot to the pressure.

As soon as it seemed to start it ends. The trees calm and sigh in relief, building roofs settle and the wind clears of the air circle. In the centre, a figure curled in the fetal position, gasping for air, with burns on their face and chest, appears.

A glowing necklace and familiar sword are with the Air Champion as he lies, clinging to life. Auron has returned.

For Lexicus, it was a day like any other. He had nearly finished his routine of checking the elemental circles, a routine he had picked up ever since two of their champions had went missing. He had started at Earth, then moved on to Water and then Fire. As he followed the path from the forge to the inn he thumbed the Air mana in his hand, a tribute to Lord Air.

Upon seeing the lost Air Champion curled on the ground, Lexicus stops and drops his staff of bone from his hand. "Champion Auron!?", he calls out in shock and disbelief. He quickly returns the Air mana to a blue pouch on his belt before pulling a different mana from a brown one. Lexicus rushes to the circle while retrieving his spellbook from his bag. Kneeling next to Auron, he traces the mana over the page. "The Earth Will Heal You 3 Points" he says quickly before touching the mana to the champion. Still shocked by Auron's sudden reappearance and current condition, Lexicus waits to see if his spell was of any help.

Auron takes a sharp intake of breath at the spell's command but still seems to be in a state of shock.

Taking this as a good sign but unsure how to proceed, Lexicus calls for help. "Salvation!"

Asher, like most days since the fall, sat patiently at the Air Circle. She waited for any kind of movement, any stirring within the magical well of energy. Just like every other day, there was nothing.

She sighed deeply. Maybe it was best to call it and grab something to eat...but just as she began to gather her belongings, she felt something. A great gust of wind from the air circle knocks her off her feet and onto the ground.

She closes her eyes to protect from the swirling debris. As the winds died down, she's finally able to open them. A man is heaped in a pile before her, burned and broken. She barely recognizes him, save for the glowing necklace, and matching wedding ring.

"Auron?" she cries as she crawls to his aid

When he hears Asher's voice, Auron attempts to move toward her. However, he finds himself unable to do so. His battered body is only capable of taking one action at the moment: breathe. He takes in deep breaths, again and again, seemingly unaware of the world around him.

Several minutes pass before Auron finally seems to come to his senses. He rolls over on the ground, and looks up at the worried pair kneeling over him. "... Asher?" He attempts to smile, but the painful burns on his face quickly cause him to wince instead. "It's... very good to see you again, my love."

He then turns to Lexicus, and gives a look of respect. "Thank you for the timely healing, my friend. I owe you one."

After a few moments, and in spite of the pain, Auron sits up and looks around. "When I left, winter was upon us. But it now looks as though the winter has come and gone. How long have I been gone?"

Upon being spoken to, Lexicus nods and gives a soft smile. "My pleasure" When asked about the date, he looks concernedly at Asher then back to Auron. "You left in October... it is early April now..." he pauses, "What happened to you?"

"6 months. You were gone 6 months you big jerk." she smiles and chuckles through her breath, attempting to break the tension a little. She tries to keep a straight face while studying his burns, but struggles. Clearly, hes been through a lot.

At the sight of a smiling Asher, Auron's breathing noticeably calms and his pained expressions relax.

"Six months... has it truly been that long? It feels like I've only been gone for..." Auron pauses for a moment, with the look of a man who is trying to remember some lost detail. "... that's odd. I can't quite tell how long I was in that place. It feels like I was only there for a few hours, but it somehow also feels like it's been months."

"As for where I've been, it's a bit of a long story. Lord Air put me through a trial, and it very nearly cost me my life. I'll be happy to tell you the full story, when every single part of my body stops hurting." He attempts to laugh, but he can only manage a pained exhale and a brief smile. "For the moment though, I need to rest. Can we take this conversation to the Citadel?"

"Of course" Lexicus stands and extends a hand to the Air Champion to help him up. "Or would you prefer if I left the two of you alone for some time together?"

"Actually Lexicus, I'm not sure he can walk too far on his own. Will you help me bring him to the Citadel?"

She cranes her neck as lwowly as she can and slowly positions aurons arm around her.

"This probably won't feel great, but we need to get you on your feet. Ready?"

"Oh, certainly, my mistake." He bends back down, putting Auron's other arm around himself.

Cecil sips tea quietly in the while reading when suddenly he hears calling for aid. He take one more sip of his tea before abandoning the mug and grabbing his bag is supplies. He runs off towards where he heard yelling for a medic.

Arriving at the scene he sees Auron being held by his wife and Lexicus.

"Let me look at him before we try and carry him somewhere, okay? I don't want to chance causing any more damage."

He looks over Auron in his rough state 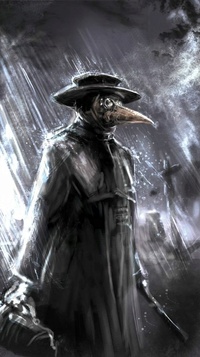 *Auron's chest and chin are severely burnt, though the appearance is surface level, it is obvious that these burns will impede his ability to draw a full breath. A preliminary exam shows that Auron's body is exhausted, he could walk and run if pushed but is ill advised. Further investigation shows concerns with his lungs. Currently you're unable to pinpoint what is causing the issues*

"He's exhausted to the point where walking isn't a good idea, especially on his own. We could carry him perhaps if you're okay with that Auron it will help save your strength if you would like to go somewhere inside, or I can just tend to what I can do here if that's okay. Those burns really need to be tended to and I need to take a closer look either way. There is something wrong with your lungs that defiantly needs further examination."

He says looking towards Auron mostly and Asher while he talks, he does acknowledge Lexicus though.